Congratulations to our latest and 26th CCL graduate, Aryan Balyan. Aryan became our 26th graduate by having a couple of strong performance at a couple of recent tornados. 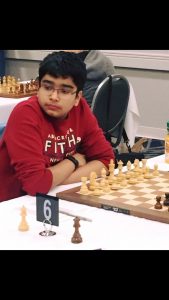 After hitting 2000, I felt more relief than excitement. I owe most of my success to Coach Goran, Coach Vlatko and Coach Alan.  They have played a key role in my time playing chess. Outside from school and apart from chess,  I enjoy playing sports such as basketball, participating in school math olympiad teams, and hanging with friends.  If I’m not doing anything productive,  I’m usually on my phone or gaming.  Although it may seem I spend a lot of time apart from chess, I spend a majority of the time following chess.

What Aryan has reported above happens often to serious chess players.  They hit a long period where their rating does not increase, especially after a previous large increase in their rating.  At this point CCL either loses the student or they stick it out and head to very high levels of chess.  Please do not give up on yourself too quickly.  The return on your investment of hard work will always pay off, there are just going to be delays and bumps in the road.  I am positive that we will see this in Aryan as we have in many others.  Aryan is a huge talent and I expect exceptional performances in his future.

See a game that Aryan recently played to earn his CCL graduation by CLICKING HERE. This Who’s Who chess list has been growing with great talent which is clearly characterized by a high value on perseverance, hard work, and passion. What is a CCL graduate?  It is an honorary degree that we give to any CCL player who has worked their way through the ranks while in CCL and has made a USCF experts rating (>= 2000).  This group is becoming a who’s who of the top young talent around. It is little surprise that the top 13 rated scholastic chess players in Ohio are all CCL graduates!!! Being a CCL  graduate entitles them to lifetime membership in CCL, based on good behavior, without the requirement of taking lessons.  They are allowed to receive email spam from me for the rest of their lives!! Who will be next?

CCL graduates are (in order of obtainment):