Just like in 2012, 5 CCL players have qualified to play in the upcoming 2013 World Youth Chess Championships.  It is quite an honor to for a chess organization to ever have 1 player qualify but with 5 per year, and expecting even more for next year, this is incredible.  You have raised the bar so amazingly high.  Our returning qualifiers from last year include Maggie (who is about to leave for the Pan American Championships in Brazil), Chris (Bronze medal winner from last year’s World Youth Championship), and Luke (who is about to leave for the Barber Invitational).  New to this year’s invitees are Annorjan whose USCF rating has skyrocketed to 2087.  Our 5th person, John, is not official yet but is expected to soon receive an invitation to play on the Irish team.  John is currently completing a very successful chess tour of his home of heritage, Ireland.  In our game section I have posted his last round win over FIDE rated 2330, David Fitzsimons, from the Ireland Championship.  In addition to scoring very well in the Ireland Championship, John swept the field their Amateur Championship, showing once more that CCL players are trained to compete successfully in the international arena.

Below is a picture taken before the start of the 2013 Ireland Championship. 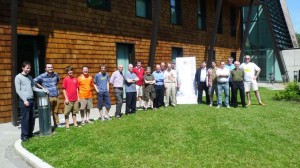